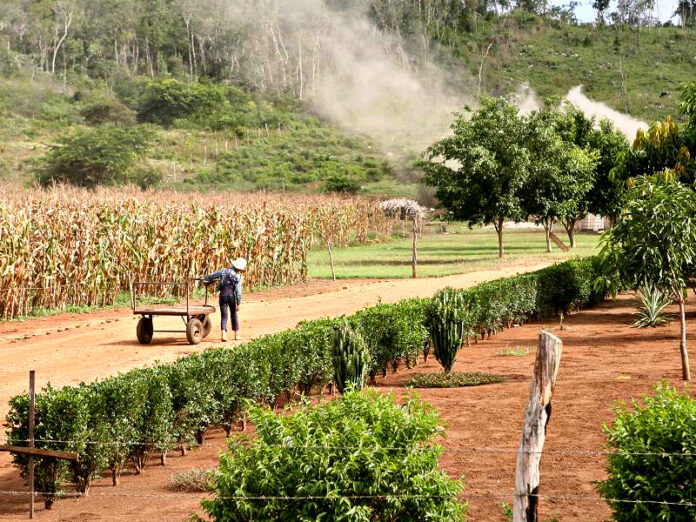 VALLE NUEVO, CAMPECHE- The largest tropical forest in North America yields perfect rows of corn and soy. Light-haired women with blue eyes in wide-brimmed hats bump down a dirt road in a horse and buggy, past simple brick homes and a whitewashed schoolhouse: A Mennonite community in southern Mexico.

Here, in the state of Campeche on the Yucatan Peninsula at the northern edge of the Maya Forest, the Mennonites say they live to traditional pacifist values and that expanding farms to provide a simple life for their families is the will of God.

In the eyes of ecologists and now the Mexican government, which once welcomed their agricultural prowess, the Mennonites’ farms are an environmental disaster rapidly razing the jungle, one of the continent’s biggest carbon sinks and home to endangered jaguars.

Smaller only than the Amazon, the Maya Forest is shrinking annually by an area the size of Dallas, according to Global Forest Watch, a non-profit organization that monitors deforestation.

The government of President Andres Manuel Lopez is now pressuring the Mennonites to shift to more sustainable practices, but despite a deal between some Mennonite settlements and the government, ongoing land clearance was visible in two villages visited by Reuters in February and May.

Farmers such as Isaak Dyck Thiessen, a leader in the Mennonite settlement of Chavi, are finding it hard to adjust.

“Our people just want to be left in peace,” he said, standing on a shaded doorstep to escape the unforgiving afternoon sun. Beyond his neat farm rose the green wall of the rainforest.

In search of land and isolation, Mennonites – for whom agricultural toil is a core tenet of their Christian faith – grew in numbers and expanded into remote parts of Mexico after first arriving from Canada in the early 20th Century.

Despite shunning electricity and other modern amenities away from work, their farming has evolved to include bulldozers and chainsaws as well as tractors and harvesters.

In Campeche, where Mennonites arrived in the 1980s, around 8,000 sq km of forest, nearly a fifth of the state’s tree cover, has been lost in the last 20 years, with 2020 the worst on record, according to Global Forest Watch.

Groups including palm oil farmers and cattle ranchers also engage in widespread land clearance. Data on how much deforestation is driven by Mennonite settlers and how much by other groups is not readily available.

One 2017 study, led by Mexico’s Universidad Veracruzana, found that properties owned by Mennonites in Campeche had rates of deforestation four times higher than non-Mennonite properties.

The clearance contrasts with the traditions of indigenous farmers who have rotated corn and harvested forest products such as honey and natural rubber since Maya cities dominated the jungle from the Yucatan to El Salvador.

Under international pressure to pursue a greener agenda, in August the government persuaded some Campeche Mennonite settlements to sign an agreement to stop deforesting land.

Not all the communities signed up.

On the edge of the remote village of Valle Nuevo, Reuters journalists witnessed farmers clearing jungle and setting fires to prepare for planting.

Jacob Harder, Jr., a Mennonite school teacher in Valle Nuevo, said the agreement had not made an impact on how Valle Nuevo approaches agriculture.

“We haven’t changed anything,” Harder said.

Leader Dyck Thiessen and a lawyer representing some communities and farmers said Mennonites, who take a pacifist approach to conflict, felt attacked and scapegoated by the government’s efforts.

Jose Uriel Reyna Tecua, the lawyer, said they were unfairly blamed while the government pays less attention to others that deforest.

At one meeting last year, Agustin Avila, a senior official at the federal environment ministry, warned villagers the military could be brought to the area to prevent deforestation if the communities did not change their ways, Reyna Tecua said.

“That was the direct threat,” Reyna Tecua said.

In response to a Reuters question about Avila’s alleged comments, the environment ministry denied any mention of using the military, saying the government operated on the basis of dialogue.

Carlos Tucuch, head of the Campeche office of Mexico’s National Forestry Commission (CONAFOR), told Reuters the government was not singling out the Mennonites and was also tackling other causes of deforestation.

Mennonites trace their roots to a group of Christian radicals in 16th century Germany and surrounding areas that emerged in opposition to both Roman Catholic doctrine and mainstream Protestant faiths during the Reformation.

In the 1920s, a group of about 6,000 moved to northern Mexico and established themselves as important crop producers.

Still speaking Plautdietsch – a blend of Low German, Prussian dialects and Dutch – a few thousand moved to the forests of Campeche in the 1980s. They bought and leased tracts of jungle, some from local Maya indigenous communities. More arrived in recent years as climate change worsened drought in the north. read more

In 1992, legislation made it easier to develop, rent or sell the previously protected forests, increasing deforestation and the number of farms in the state.

When Mexico opened up the use of genetically modified soy in the 2000s, Mennonites in Campeche embraced the crop and the use of the glyphosate weedkiller Roundup, designed to work alongside GMO crops, according to Edward Ellis, a researcher at Universidad Veracruzana.

The higher yields mean more income to support large families – 10 children is not unusual – and live a simple life supported by the land, said historian Royden Loewen, explaining that settlements often invest as much as 90% of profits to buy land.

At least five Mennonites who spoke to Reuters said they wanted to acquire more land for their families.

While most Mexican Mennonites remain in the north, there are now between 14,000 and 15,000 in Campeche spread over about 20 settlements.

“If God grants you, then you grow,” said Dyck Thiessen, who has attended government meetings but did not sign the agreement.

The Mennonites largely maintain a tense peace with local indigenous communities who serve as guardians to the surrounding forest but also rent equipment from their new neighbors for their own land.

“With them, we began to have access to machinery. We see that it gives us results,” said Wilfredo Chicav, 56, a Maya farmer.

Such advances in agricultural efficiency have taken a toll on the Maya Forest, home to fauna that includes up to 400 species of birds.

Its 100 species of mammal including the jaguar, are at risk of extinction in Mexico, if its habitat shrinks, said the forestry commission’s Tucuch.

Between 2001 and 2018, the three states that comprise the forest in Mexico lost about 15,000 sq km of tree cover, an area that would cover much of El Salvador.

This is driving a shorter rainy season. Farmers used to schedule planting for the first of May, now they often wait until July as less forest implies less rainfall capture, leading to a drop in moisture uptake in the air and a decrease in rain, Tucuch said

Campeche’s Environment Secretary, Sandra Laffon, said the Mennonites in the state did not always have the right paperwork to turn the forest into farmland.

Reyna Tecua acknowledged problems with land purchases. Families sometimes fall victim to deals based on a handshake and verbal word, and sellers can take advantage by promising land that is not up for legal sale in the first place, he said.

The agreement signed last year created a permanent working group between the government and Mennonite communities to try to resolve permitting, land ownership, and administrative and criminal complaints against them from local people including for illegal logging.

Laffon said there were signs the agreement is having an impact. Global Forest Watch data showed a decrease in deforestation in Campeche in 2021 but said that could be the result of factors including a lack of remaining land suitable for agriculture and government incentive programs, which include a nationwide scheme popular with Maya indigenous farmers that rewards tree planting.

Mennonite leaders are seeking a proposal from the government that won’t cut their production dramatically, Reyna Tecua said. A government plan to phase out glyphosate by 2024 is the biggest worry for many, he said.

However, lower production may be a price farmer, including Mennonites, have to pay to protect the environment, Laffon said.

“We are at the point of having to sacrifice our position” as Mexico’s second-largest grain producer “for a healthier Campeche,” she said.

Lifting his cap to wipe sweat from his brow, Dyck Thiessen, the Mennonite leader, doubted the organic methods proposed by the government would be successful. Tension with officials has stalled his plans to acquire more land, he said.

Still, he has faith.

“If the government shuts us down,” he says, “God will open for us.”

Guillermo Chin Canché, the only Mexican chosen by NASA to explore Saturn and its moon Titan