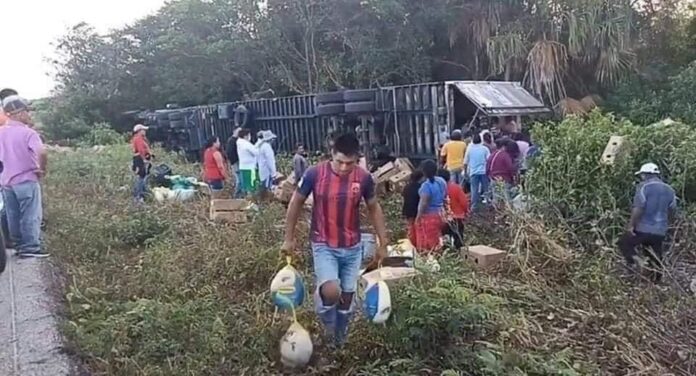 A new case of looting an overturned trailer was registered in Campeche, where neighbors took advantage of the accident to take frozen turkeys.

According to National Guard reports, a trailer carrying more than 40 tons of frozen turkeys overturned on the Ciudad del Carmen-Champotón highway, near Punta Xen.

Everything seems to indicate that the driver lost control of the unit when entering a curve and rolled over.

How was the poaching of frozen turkeys?

The driver was unhurt, but residents of Punta Xen and other nearby communities arrived at the scene and took the frozen turkeys.

Some even used boxes, wheelbarrows and even vehicles to carry the valuable cargo for this Christmas season.

Elements of the National Guard and state and municipal police went to the scene of the accident but could do nothing to prevent the robbery.

Previous acts of prey in Campeche

It should be noted that acts of robbery of damaged vehicles on the roads of Campeche are constant.

Last October, a trailer loaded with 30 tons of gray cement crashed on the Mérida-Campeche highway and its cargo was stolen in less than two hours.

A month earlier, something similar happened on the Mérida-Campeche federal highway, near the town of Pomuch, Hecelchakán.

On that occasion, a trailer carrying a batch of pigs overturned and the looting was registered by people from nearby towns.

Campeche Bicycles must have plates and be registered proposal