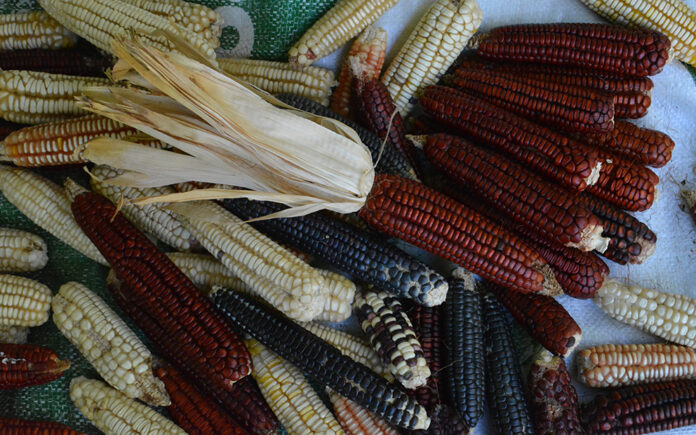 Chiná, Campeche, (October 01, 2021).- After a project for the recovery of species and variants of native and creole maize in the state of Campeche and monitored by the Technological and Agricultural Institute of Chiná (Itach), researcher Noel Valdivia revealed that the institution has under guardianship, protection and research six species Native corn of the entity such as Dzib Baakal, Naal Te’en, Xnook na’al, Xmanhana, among others, of these, have recovered 26 varieties in three years of the program under their care.

In the entity, and since the beginning of the project, the Itach has marked three development points of the project, in Tenabo, Hopelchén, and Calakmul municipalities, the latter in a special way since it is an area that lacks water, does not have a distribution network for the liquid They even suffer from severe droughts for months, which is why Naal te’en has an essential place in the area since it can develop without much water.

The main characteristics of these are that they have a higher nutritional value than the commercial corn known in Campeche, those with white and yellow grain, some even have greater resistance to water shortages and high temperatures than transgenic corn, which are imported to the Mexican market from the United States as part of the agreements in the commercial treaties of North America

“We are badly used to production being easy, if we could make it grow we would only do it, but what we are allowing today with the use of agrochemicals and improved seeds that need a high concentration of pesticide active, will pass serious bills in terms of health. Many people die of chronic degenerative diseases, cancer, diabetes, kidney disease, among others, and it is due to the use of these substances “, he argued.

He also recognized that native corn crops, for example, require greater care, but can be more environmentally friendly as it does not generate a serious ecological impact and allow the cultivation and harvest cycles to be just as the Maya heritage dictates, by climatological, solar and astrological phenomena, which dictate a calendar of agricultural activities.

The reason why they do not have greater diffusion and much less public policies for their care is that these species do not comply with the necessary factors for commercialization regarding their care and production cycle, so it is easier to grow transgenic corn, take care of it with aggressive agrochemicals for all types of weeds and pests, but in a few years, you will see the consequences of not respecting the production cycles.

“As academics, the institution has issued proposals and observations to each government that enters to take into account certain projects that could generate a greater and better production of various agricultural products, corn is one of them and we even exposed it to the engineer Armando Toledo Jamit and Ignacio España, but there was no more than a talk ”, the researcher highlighted when referring to the fact that they were secretaries of Rural Development.

The promotion of the use of native seeds also surpasses modified corn in view and image, the colors, textures, and flavors are much better than white or yellow, they can be seen from red, purple, blue, and multicolored ears, it is impressive.

That is why the project is currently in the promotion phase since he explained that they are training their students so that they are the ones who champion the use of native seeds, pointing out that 40 percent of the Itach students are young people from peasant communities and therefore Those who already have plots have the permission to generate seeds of these species to practice.

In addition, he recognized that the current average age of farmworkers and peasants is between 50 and 70 years old, but he trusts that promotion and practice as they do in Itach will be the strategy that will integrate young people into this type of project.