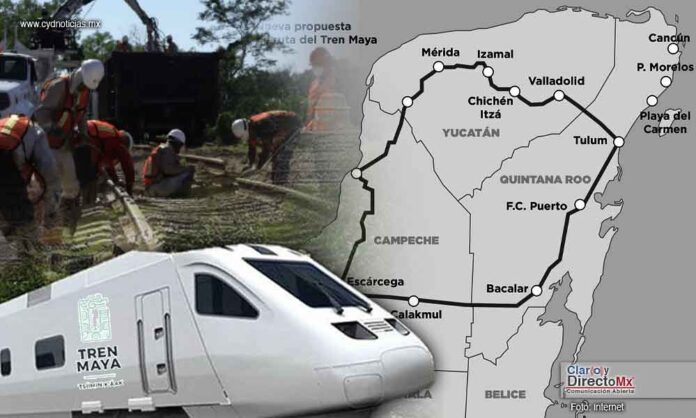 The train will no longer enter the city center; the station will be built on the outskirts of the urban area, the agency reported.

The National Fund for the Promotion of Tourism (Fonatur) announced that the route of the Mayan Train will be modified and will no longer pass through the city of Campeche, but through the periphery, which will generate savings in the total cost of the work of more than 2,000 million of pesos.

“The train will no longer enter the city center. The station will be built in the periphery, on the outskirts of the urban area, ”the agency reported in a statement.

According to the document, Rogelio Jiménez Pons, head of Fonatur, pointed out that this decision was made as a result of an analysis of costs and time that the relocation process would take, so the new route of the Mayan Train will allow savings economic and time, which are important to the project.

“It was decided to build the roads parallel to the Pablo García and Montilla peripheral, locating the station near the airport. In addition, the construction of bus stops near the city of San Francisco de Campeche is being contemplated, ”Fonatur said.

“We have made the decision for a practical matter, to go to the periphery. Campeche is a relatively small city, so the station that is being set up is on the periphery at the height of the airport. The location of the new road to the center has a distance of around seven minutes, so it is not a connectivity problem, “he said.

Jiménez Pons pointed out that with this change in route there is also the need to establish an annex transport system that allows the population, workers, and tourists to travel easily between the center and the new station.

Although said Jiménez Pons, “it is a shame” that the train can no longer pass through the city of Campeche since this would be a good attraction, work will be done so that the transport system can connect the new station with the city.

This is the second time that the Fonatur has made a modification in the route of the Mayan Train. It was in July of last year when there was a change in section 4, due to the results of the pre-feasibility study that identified a risk due to the presence of highly karstified areas starting from Valladolid, which implies “the presence of caverns and cenotes of considerable dimensions ”.

Through Campeche, the cross-sections 2 and 7 of the Mayan Train. In this sense, the company in charge of the construction of section 2 is CICSA, owned by businessman Carlos Slim.

In July, President Andrés Manuel López Obrador made private visits to Campeche and Yucatán to supervise, by air, the work of the Mayan Train, and inhabitants of the Santa Lucía, Ermita and Camino Real neighborhoods, in the state of Campeche, sent messages of protest on the railroad against the construction of the project and to avoid being evicted.