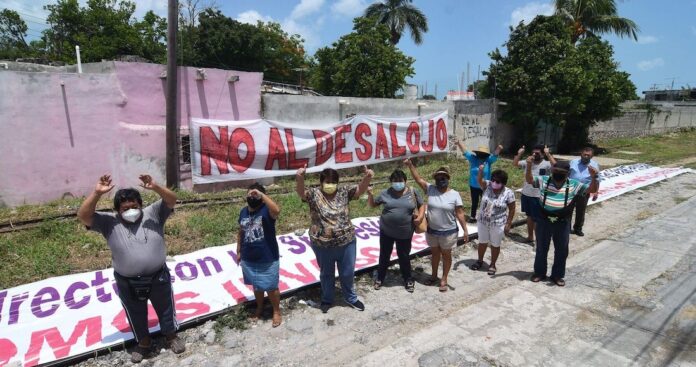 The Fonatur has detected 2,294 properties with 3,286 homes in cities of the Yucatan Peninsula that must be relocated because they are on the right of way for the Mayan Train. Although 250 families have accepted, others are protected.

The National Tourism Promotion Fund (Fonatur) reached agreements with around 250 families, of the more than 3,000 households that live within the right of way where the Train is built Maya, to advance the processes of ” consensual relocation” in the Yucatan Peninsula.

However, Kalycho Escoffié, the legal advisor for residents at risk of being removed, stated in an interview that these are “forced evictions” that violate the right to housing and others such as work, territory and identity, for which neighbors have initiated at least four amparo trials in the city of Campeche and Candelaria, Campeche, whose sentence can be extended until 2022. Other people, he said, have given in “out of fear” even though the new house is far from their employment centers or public transportation.

“Fonatur is seeking, together with other authorities, to evict people extrajudicially when it does not have the legal powers to do so. They argue that it is not an eviction because they will be given housing options, but that implies that they will be made to leave their homes regardless of whether there is compensation to which, of course, they would be entitled, “he said.

In the coming months, the first part of the delivery of homes will begin to those who accepted the move and relocation, and who currently live in Pénjamo, Tenosique, El Faisán and Icorsa, in Tabasco; El Naranjo, Haro, Candelaria, Escárcega and Pixoyal, in Campeche; and other communities in Yucatán. While the families that negotiated financial support have already started the transfer of resources, Fonatur reported this week.

“It is true that there are families who have agreed to the process, but just as some saw it as an opportunity, many people did it out of fear. If they do not go away right now, they fear that later they will be made to leave the wrong way and they will have to fight with the Government for the most important infrastructure project of the six-year term, “said the lawyer.

The Fonatur has detected 2,294 properties with 3,286 homes in Campeche, Cancún, Candelaria, China, Escárcega, Mérida, Palenque, Playa del Carmen, Puerto Morelos, Tenosique, Calkiní and Benito Juárez that must be relocated, because they are on the right-of-way and involve a risk as a high-speed train.

In the three historic neighborhoods of Santa Lucía, La Ermita and Camino Real in the city of Campeche, the agency states that there are around 70 people who have accepted the relocation of the more than 300 houses and businesses that must be removed.

“Of those 300, 110 have amparo proceedings against evictions and of those 60 or 70 that Fonatur speaks of, there are people who went to an information meeting, but also presented amparos,” exemplified the lawyer. In Camino Real, a fishing district a few blocks from the boardwalk, they fear losing their source of employment and tourist income when they are removed.

“The authorities have used a stigmatizing speech accusing them of being land invasions when these three neighborhoods have existed since before the 19th century when the train tracks were built after 1930 and similar situations are seen in various Mayan communities such as Candelaria, Chocholá and Maxcanú ”, stated the legal advisor.

The agency estimates to relocate this year 1,314 homes that are 20 meters or less from each side of the railroad and another 1,972 in 2022. At the same time, it plans to buy land or build almost three thousand homes to your move.

At the moment, the execution of 173 housing actions with the National Housing Commission (CONAVI) has been approved and “dozens more” are being integrated into the Social Housing Program. Another 80 families have already started the negotiation processes.

“There are communities that are recently learning that they will have to be removed to make way for the project, so it is highly questionable whether there is a consensus,” said lawyer Kalycho Escoffié.

ADVANCES OF THE MAYAN TRAIN

Along with the injunctions promoted by communities against the construction of the Mayan Train due to the absence of an adequate indigenous consultation and the risk of eviction, the Government of Mexico began work in March for the construction of the last section that corresponds to 121 kilometers of double way from Cancun to Tulum.

This route V, in charge of the Secretariat of National Defense and another part of Grupo México, will be fully electrified and will have four stations, in addition to three stops.

The last suspension granted in favor of the communities has no effect on the rehabilitation, maintenance or modernization of the existing right of way, only on the new work, nor on the execution of studies or processing of permits, so the works continue normally in the Yucatan areas.

In addition, the Fonatur received cargo with rails for the construction of the new rail system between May and July. It also recently signed the contract for the Mayan Train Rolling Stock and Railway Systems with the consortium led by Bombardier Transportation and Alstom, in conjunction with the companies GAMI Ingeniería y Construcciones Urales.