Kalycho Escoffié, part of the legal team of the “Tres Barrios” collective in Campeche, expressed his opinion about the suspension of work on the Mayan Train in section 2 (Escárcega-Calkiní), noting that this is a precautionary way to continue with the trial process, however, as well as other amparos have been favorable to the residents the authority does not stop the works, so they will continue to fight.

In the case of the Tres Barrios collective, he expressed that he is not against the project itself, but the intention is that the families who live near the train tracks won´t be relocated from their homes.

Various groups and organizations have carried out many injunctions in communities and urban areas, about 10 injunctions for various situations, for which many have had results, especially the latest published, from the district court in Campeche, corresponding to the suspension of section 2 (Escárcega-Calkiní), which is a precautionary measure within the trial, which does not mean that the communities have not been right, but considered that the works should be stopped until the trial is carried out to avoid irreparable damages.

“The Supreme Court of Justice of the Nation has already said repeatedly that when the district judges issue this type of precautionary measures, called suspension, they must be complied with for the time being, since they are ordered regardless of whether or not the authorities were notified. ”, He detailed.

Kalycho Escoffié stressed that although they, like other groups, are not totally against the construction of the Mayan Train, they have fought because in their case they want the tracks to be relocated so they don´t have to move all the families of the place. However, we can see that the authorities have endeavored to conclude the works at any cost, without respecting the will of many communities and people who have opposed this work, or who have expressed their concern about the effects of the project in the region.

Despite the pandemic and the effects of natural phenomena that have affected the various states involved in the work of the Mayan Train, they have continued with the construction, so it shows that the federal government wants to continue and finish as it should regardless of other points of view and even abide by the provisions of the various district courts since there are various suspensions along the sections that have not been complied with due to various excuses, said the lawyer.

Finally, he recalled that although these are not definitive measures, as they are only precautionary during the upcoming trial process, he called on citizens, in general, to follow up on the issue and above all to stay informed since it is a very important and complex project that has different edges and different impacts, from environmental, social, economic, development in the region, among others.

Suspension will have economic effects

On the other hand, so far, the Confederación de Trabajadores de México (CTM) Campeche has not been notified of the suspension of section 2 of the Maya Train, indicated the union secretary, Wilgen Hernández Cherrez, who explained that currently 800 workers are working in the works of the federal project and the suspension could affect various items, mainly economic since it seeks to hire at least 2 thousand more people at the beginning of next year.

“Not until now, I believe that legally the company is seeing it on its part and on the part of us as workers. We are working to comply with everything in civil protection, FONATUR, and everything in the law that is requested. In our case there has been no suspension, remember that in the case of the Maya train it is divided into four parts, which corresponds to us from Calkiní to Escárcega, which is section 2, where we are working until today (yesterday)”, detailed Hernández Cherrez.

He said that to stop the works would greatly affect, since at the moment there are at least 800 workers, including drivers and labor, and it is projected that for the parts of Champotón, Pocboc, and Santa Cruz by 2021 at least 2 thousand more employees will de hired.

“This is my home”

The ten neighbors have the same opinion as Guadalupe Gutiérrez, a 63-year-old woman who has become the head of this defense of homes. “We are not invaders. I was born here. We are now five generations of my family and we have owned the property since 1893. Here he prayed to my dead, here my grandparents lived and this is where my children came from. I’m not leaving here, ”he says in the hallway of his house, painted purple.

“In 1938, when Lázaro Cárdenas made the railroad connectivity of the Yucatán Peninsula with the rest of the republic, my grandfather donated land, they threw him a house and we went as far as the authorities told us we had to live. We are not invaders, we are here before the train arrived ”. He shows some folios with copies of documents from the end of the 19th century. There is also another family with one from the 1940s reflecting the donation.

His home is at the beginning of the Santa Lucía neighborhood and his two sisters live on the same block, just two meters from the train track. Walking with her on the tracks, among which the flowers and plants that have grown on the rails, is endless greetings. Neighbors who speak of old shops, houses that have been there for more than half a century, of the social fabric, that they voted for Q4 and now feel betrayed. The houses are mostly one story, solid, some with colonial architecture.

Also a local history lesson. The freight train, Gutiérrez says, passed until August 2020 a couple of times a day, at about 20 kilometers per hour. At the beginning of the 2000s there were a couple of derailments that demolished some houses and some neighbors began to promote the same solution that they want now for the Mayan Train.“Our proposal has always been the relocation of the railroad tracks. Why can’t there be a bypass outside the city? Why do they have to leave the city and move? ”, He argues,“ we had a meeting with Fonatur and Onu Habitat and it was quick. They said that the train was going to pass yes or yes and they did not open to listen to our proposals ”.

In a June 2020 statement, Fonatur assured that it will propose adequate solutions with each family in Campeche that has a property on the right of way of the Mayan Train and that works with UN Habitat, to which according to its agreement it pays five million dollars in consultancy concept, in the elaboration of a Consensus Relocation Protocol. According to the neighbors, they have received calls from Onu Habitat without giving anyone their phone numbers and an in-person census was attempted from April 13 to 20, in the middle of the Healthy Distance Day due to the coronavirus pandemic. They also say they have received “intimidating” visits by people who identified themselves as members of Fonatur and UN Habitat, who asked them where the neighbors met or who the leaders were.

Some neighbors have been told that they are going to offer this “consensual relocation” / “forced eviction” to the Siglo XXI neighborhood, located almost 10 kilometers from the coast and the port, instead of the 400 meters they now live. the fishermen of Camino Real. Like Gustavo Ganso, 64 years old. “Now, when bad weather comes from the north, which gets up in less than ten minutes, I can run down to the port to protect my boat so that it doesn’t get destroyed by the seashore, but if they take me away, what am I going to do? do? How am I going to get there in time to save my way of life?

Other fishermen interviewed share Ganso’s concerns.“They are going to displace us, but we don’t know where or what kind of houses. Look, I don’t want them to give me a house. Not even give me money. This is my home, ”Guadalupe Gutiérrez has a tremulous voice and tears,“ it’s not okay, this is a dispossession that they are doing to us. I have made the decision that I am going to continue to the last consequences ”. The rest of the meeting nods and approves and it is heard in the background that shooting down a house is much worse than raffling a plane.“The history of the train begins at the end of the 19th century with the concession, its construction began until the 20th century and its operation in the 30s. Many of the towns through which this train line passes already existed before the concession, that is, it was placed on existing populations ”, explains Kalycho Escoffié, a lawyer from the Autonomous University of Yucatán.

“These three neighborhoods are historic in the city of Campeche, consolidated, with access to electricity, water, they pay taxes,” he argues, “they are not informal settlements as the authorities sometimes say, who go to the neighborhoods and tell their neighbors that they ‘invaded’ the train tracks and that they shouldn’t be there, but they are willing to reach an agreement. With this, they try to convince people that they do not have the right in their favor and that they have the upper hand to lose ”. 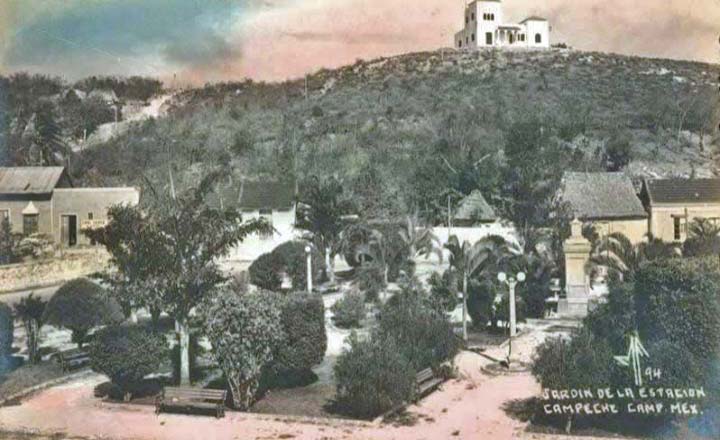 Kalycho Escoffié takes the protection that the group of the Tres Barrios de Campeche has presented against Fonatur, the presidency of the Republic and the Secretariat of Tourism to stop the works and that what is relocated are the Mayan train tracks and not human beings.

The court, he says, granted a suspension so that Fonatur, with UN Habitat, could not continue making visits to the neighborhoods to make the census of affected people and properties while the judicial process is resolved.

“But during the pandemic, suddenly the neighbors saw workers doing surveying work on the roads in the neighborhoods. They approached the workers and told them they came from Telmex, which is Grupo Carso, owned by Carlos Slim, ”he says. Operadora Cicsa and FCC, both owned by Slim, lead the consortium in charge of the construction of Section 2 of the Mayan Train, where the city of Campeche is located.“Onu Habitat and Fonatur say that it is a relocation process, but we are concerned that it is a forced eviction process. This is a violation of human rights that consists of making people leave their homes and territories in opposition to their will without there being a procedure in accordance with current legislation and they can defend themselves, “he explains,” and as there is no process of expropriation or judgment is a final sentence, or anything similar to remove them; pressuring people to leave their homes is a forced eviction ”.

The discourse of the authorities to call invasions to people who live in the right of way is reflected in the official document from which this inventory comes out that, of the 724 kilometers, 294 have “existing invasions” with 1,718 points. These pages belong to the more than 1,500 pages of Basic Engineering for sections 1, 2, 3 and 4, carried out under a contract of 346 million pesos.“In the city of Campeche they are not ‘invaders’, as the authorities say to stigmatize them, although they are populations prior to the right of way. And even if they were an informal settlement, which is not the case, they have rights that have to be respected and cannot be displaced just like that ”, reasons the jurist Kalycho Escoffié,“ during the more than 60 years that the train track operated, they left people living there without saying anything to them; It is important that you know that any community on the existing right of way is at that risk ”.