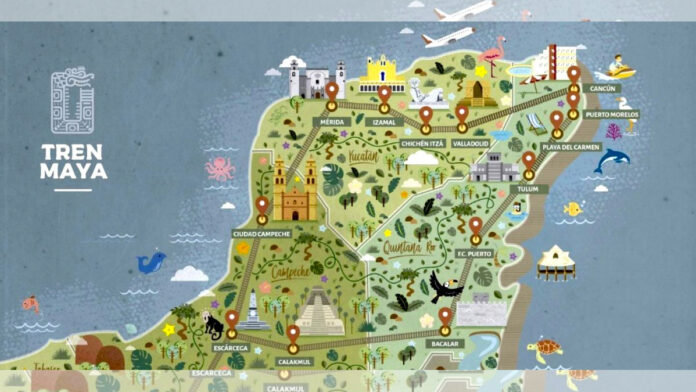 Campeche, Camp.- Civil associations have joined together to denounce, among various anomalies related to the Maya Train Project, the affectation of at least 144 hectares of forest land by the National Fund for the Promotion of Tourism (Fonatur), directly related to the change of use of land in the once untouched forest land, for which they ask the competent authorities to make the process for this procedure transparent.

The affectation on these forest lands has been registered in municipalities of the states of Campeche, Yucatán, and Quintana Roo in its great majority, and the people who follow up on these facts, indicate that it has been done outside the law, as forest vegetation has been removed, roads have been opened and in the same way, stone material banks have been established, among other activities without the authorization of the corresponding authorities in environmental matters.

“We have detected this problem from Palenque to areas near Mérida. For example, in Champotón, more than 50 hectares were affected; in Campeche, more than 25; in Escárcega, more than 21; in Maxcanú more than 14 and there are several other cases such as in Halachó and other parts of the peninsula”, specified Aarón Siller, from the southeast office of the Centro Mexicano de Derecho Ambiental A.C. (CEMDA).

He also explained that the state most affected by this irregularity is the state of Campeche, although even Tabasco and Chiapas have registered forest damage.

This assessment has been possible due to overflights that have been carried out throughout this year, and the photographs were even contrasted with satellite images from a year earlier, where the difference is noticeable and it is totally outside of the planning in the Environmental Impact Assessment (MIA).

Activists who have been following up on the Maya Train issue have already made requests for information, in which the authorities themselves indicated that the areas “do not have permits for changes in land use on forest lands linked to the “Maya Train” project.

In this sense, they emphasized that this would be a direct violation of the right to a healthy environment.

To date, there are no studies or authorizations that justify the viability of clearing forest land for the construction of the Maya Train Project.