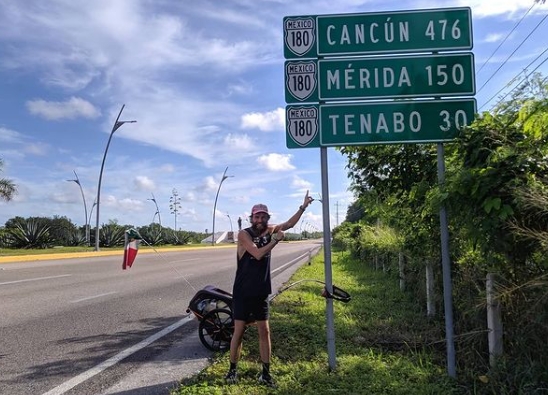 The athlete left this Thursday for Tenabo; He will continue your tour in Yucatan and Quintana Roo

A movie comes true, but with the difference that he is a German runner and that for every kilometer he gets donations for at least a dollar. Jonas Deichmann, known as the German Forrest Gump, passed through the Campeche capital, rested and this Thursday left for Tenabo bound for Yucatán.

Burdened by the climate that prevails in the peninsula, he said that the difficulty is the heat that harms his performance, he assured that Mexico has been a country where he ran in a calm and fluid way, amidst wonderful landscapes, as he highlighted the deserts of the north of the country and the vegetation near the coasts, as an example, he mentioned that Campeche has very attractive beaches.

He recalled that the reason why he runs, unlike the character played by Tom Hanks, is so that his “sponsors” donate at least a dollar for each kilometer traveled, and the total money will go to associations that support African children on issues of nutrition, among others.

This Thursday even, as well as in the film, he left from the photographic viewpoint on the city’s boardwalk towards the municipalities that make up the area called Camino Real, starting with Tenabo, then Hecelchakán and finally going to Calkiní to go to Yucatán and then to Cancun, where you will take a flight to your country.

There, local runners would accompany him until the exit to Campeche and those who could reach the town of Kobén, which is about 20 kilometers from the Campeche capital.

In Campeche, he was received by Mauricio Arceo Piña, current head of the Ministry of Tourism, who affirmed this type of eventualities promotes the tourism of the entity in an institutional way. “Jonas is a witness that he discloses the beauty of Campeche on his social networks like Facebook and with his acquaintances, and it is publicity that costs the state the least, but on a separate issue, a privilege for an athlete like him to visit Campeche,” he said.