The country reports 146,174 deaths and one million 711,283 positive cases since the beginning of the health crisis

Mexico has just passed the third record day in deaths from COVID-19, a disease that arrived in the country in February of last year. This panorama has forced the authorities of the different states to decree high epidemiological alerts due to the spread of the virus. Recently, a Financial Times calculation revealed that the country registers more than one death per minute due to the pandemic.

On January 21, the authorities of the Ministry of Health released a double record: one for high infectious levels and another for registered deaths . That is, 22,239 positive cases of COVID-19 and 1,803 deaths were confirmed in the last 24 hours.Based on the calculation that there are 1,440 minutes in a day, Thursday’s count puts the death toll at more than one per minute

Among the problems that are perceived regarding the country’s figures, journalist Jude Webber highlighted the few diagnostic tests that the government of Andrés Manuel López Obrador (AMLO) applies in the country. Besides that, he assures, the excess mortality data “expresses that the figures are underestimated.”

On the other hand, they emphasized the comment of the economic consultant Laurianne Despeghel , who has analyzed the excess mortality in the country, and said on social networks that “in fact, when considering the factor of 2.48 excess deaths for each official death of COVID-19, on a day like today more than 3 people per minute due to the health crisis in the country.

Another of the experts who verified the calculation was Gonzalo Monroy, an expert consultant in energy and specialized in Mexico and North America, who noted on Twitter: “To size this, in a day there are 1,440 minutes. This means that more than one person / minute in MX is dying from COVID-19. Of that level of fright ” .

Regarding deaths from coronavirus in Mexico, media such as the Wall Street Journal have stressed that excess mortality would be more than 265,000 deaths above what is expected for 2020 in Mexico.

During its analysis, the US media compared the additional deaths that occurred in Mexico until mid-December, that is, 267,734 victims of the disease, with the confirmations of the official registry that until the last report in January were 146,174 deaths. 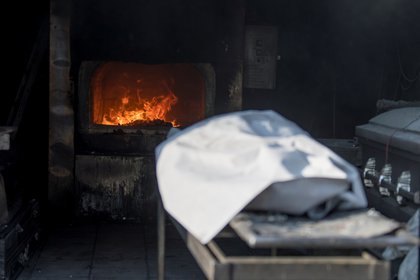 The scenario for 2021 outlines the month of January as the deadliest of the pandemic. (Photo: EFE / Miguel Sierra)

Experts consulted by the WSJ also estimated that the excess mortality from COVID-19 would be found at 300,000 cases.

The scenario for 2021 outlines the month of January as the deadliest of the pandemic. In relation to December , mortality increased by 51.3%, adding 30,070 deaths , compared to the 19,868 that occurred in the previous 30 days.

There is no longer a red traffic light due to COVID in Mexico, and Campeche turns green due to the low risk of contagion