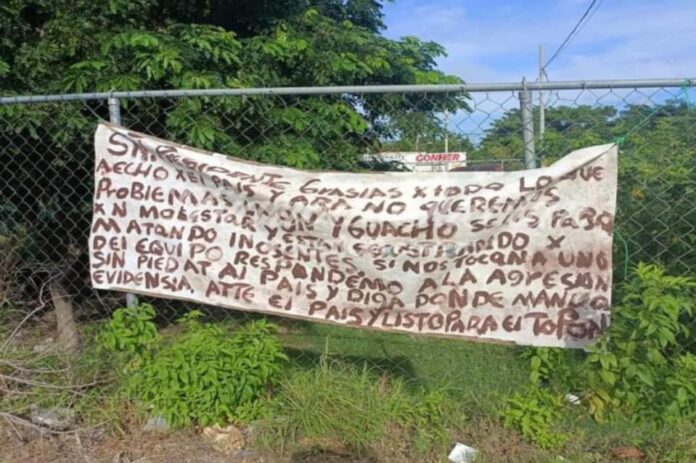 The Ministry of Public Security (SSP) removed a canvas, apparently a narcomanta, that someone hung in the periphery of Mérida with a warning message to authorities.

In Mérida, agents of the Public Security Secretariat (SSP) assigned to the Peripheral Ring, detected the “narcomanta” around 9 in the morning and immediately took it down.

MERIDA THE CITY OF PEACE IS IN THE PAST

It should be noted that this type of narco-blankets has not appeared in Yucatán for years, since the headless people of Chichí Suárez, which makes it clear that the authorities are doing their job poorly in matters of security and that insecurity has always been present in the State, and it’s hidden to sell a false image nationally and internationally.

Corruption and the mafia that is taking over Yucatan could be the cause of these types of messages becoming frequent and that more deaths add to the insecurity that is, unfortunately, reaching high levels in what was once a safe city.

In social networks, there was a rain of criticism towards Governor Mauricio Vila and the police authorities because this shows that there is not the tranquility that they always go around presuming as “Yucatan, Safe State”.

The blanket is signed by ” EL PAIS Y LISTO PARA EL TOPON ” (sic) and in it they warn that “GN and GUACHO (sic)” are extorting people.

They point out that they have been kidnapping people and if they attack a member of a group that they do not specify, they will respond.

“Narcomanta” next to the peripheral bridge of Mérida

The narcomanta in the periphery of Mérida was hanging right next to the pedestrian bridge located at kilometer 15, next to the San Antonio Kaua III neighborhood of Kanasín.

They shield the SSP building for “narcomanta” with a real threat # Yucatán Click on the link for video https://fb.watch/92o_2_WGlM/

The State Investigation Police (PEI) of the Public Security Secretariat (SSP) and the State Attorney General’s Office (FGE), in close coordination with their counterparts in Campeche, detained two men and one woman today in Mérida for placing blankets with threatening messages on public roads.

The individuals, with a long criminal record, one of them with a valid arrest warrant for homicide in Campeche, had firearms and more canvases with intimidating writings in their possession.

They are also likely responsible for the vehicle fires.

The work of investigative police and prosecutors from Yucatán and Campeche, with the valuable support of their respective C-4 (Police Monitoring and Intelligence Unit), allowed the capture of the subjects, as well as the identification of the people who hire them and who he hopes to apprehend shortly, in the capital of Campeche and the municipality of Hopelchén.

The detainees are Adrián de Jesús JG alias _Picaso_, 26 years old, originally from Campeche and living in Yucatán; Ismael PC, alias _Rayo_, 24 years old, a native of Jalisco and based in Campeche, and Alondra Isabel GA, alias _Alo_, 37 years old, from and from Yucatán.

The investigation and prosecution work carried out collaboratively by the police and prosecutors of both states considers the criminal records of the detainees and their links with people involved in these crimes.

The SSP and FGE are grateful for citizen collaboration, a key element in the prevention and prosecution of crimes.

In this case, the owners of private properties and businesses provided the authorities with videos of their cameras, which together with those of the video surveillance system, integrated tests for the identification and monitoring of the alleged criminals.