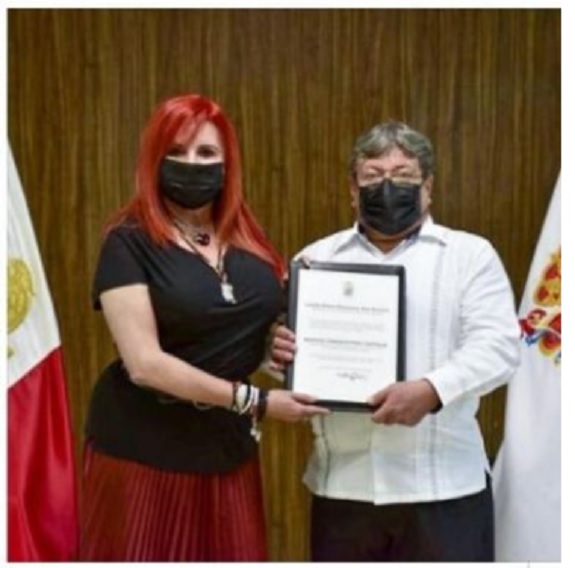 The governor of Campeche named Manuel Pino Castilla the new director of the Issstecam. Pino Castilla is credited with a publication in networks in which he insults President López Obrador and his wife. “Watch out Layda Sansores,” wrote the historian.

CAMPECHE, Cam. (apro) .- “Ojo Layda Sansores”, alerted Beatriz Gutiérrez Müller, wife of President Andrés Manuel López Obrador, to the governor of Campeche, after the latter added Manuel Pino Castilla to his cabinet, to whom a publication is attributed in his social networks in which he allegedly described the president and his spouse as “an imbecile” and a “great imbecile”.

Sansores San Román today formalized the appointment of Manuel Enrique Pino Castilla as general director of the Institute of Security and Social Services for Workers of the State of Campeche (Issstecam).

The appointment of Pino Castilla is not the only one of the new state administration that has caused sting, but it is the one that raised the most dust, especially among the workers, who in addition to reproach him for coming closer until the triumph of Sansores San Román was outlined Last year he insulted López Obrador and his wife.

On February 21, 2020, on the Facebook account of Pino Castilla, who until now served as Cultural Director of the Autonomous University of Campeche (UAC), the image of the message that Gutiérrez Müller issued on those dates was replicated with the hashtag #NoAlParoNacional, that is, their position on the national strike of women that was called on March 9, 2020.

Along with that image, the comment, apparently written by Pino Castilla was read: “behind an imbecile, a great imbecile”.

After the political scandal that caused the comment at that time, the publication disappeared from the account of the then university official, who also denied that he had written it, although he did not convince anybody.

Today, as soon as his questioned appointment was made official, that publication attributed to him flooded social networks, with some users making comments against Sansores San Román and some even tagging Gutiérrez Müller in their messages to let her know about the situation.

One of those who tagged the president’s wife was the Carmelite portal Visión Política Noticias, on this post, Gutierrez Muller responded by tagging the governor with the message: “Ojo Layda Sansores.”