Since the pandemic reached the national territory, 1,098,431 patients recovered from the disease have been registered throughout the country

The Ministry of Health (Ssa) reported 5,211 new infections of COVID-19 in Mexico, for which the laboratory-confirmed cases amounted to 1,448,755 since the start of the pandemic last February.

While with 362 deaths registered in 24 hours, the accumulated deaths due to complications of the disease rose to 127,213, according to the latest update of the daily technical report.

In addition, 1,821,903 negative infections were reported, 400,142 total suspects and 3,670,800 people studied since viral transmission began in the country. With regard to the population affected by the coronavirus, but who has overcome the disease, 1,098,431 recovered patients were identified throughout the country.

It should be noted that since December 31 the evening conference to report on the progress of the epidemic in the country has not been held. According to the Undersecretary of Prevention and Health Promotion, Hugo López-Gatell, this event will resume the afternoon of this Monday, January 4. 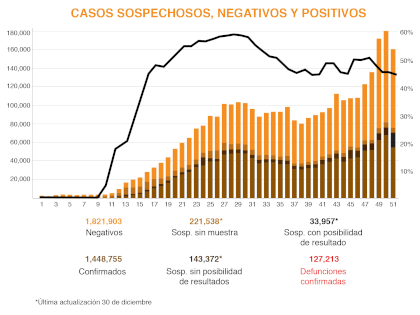 The document details that at the moment there are 53,992 active cases, that is, people who have presented symptoms of COVID-19 in the last 14 days (December 21 to January 3, 2021) and that if they do not comply with the due confinement, could greatly contribute to the transmission of the virus.

In this sense, the first 10 entities that accumulate the highest number of cases are: Mexico City, State of Mexico, Nuevo León, Guanajuato, Jalisco, Tabasco, Querétaro, Puebla, Coahuila and Baja California Sur as the entities with more than 1,000 active cases, which together account for more than two thirds (81%) of active cases in the country.

However, by calculating the estimated active cases, it is observed that, as of today, Mexico City, Baja California Sur, Querétaro, Nuevo León and Tabasco present an estimated rate greater than 70 per 100,000 inhabitants.

Regarding the new classification of the epidemic risk traffic light that will be announced this afternoon, five entities are on high alert for the contagion of COVID-19: Baja California, Mexico City, State of Mexico, Morelos and Guanajuato. 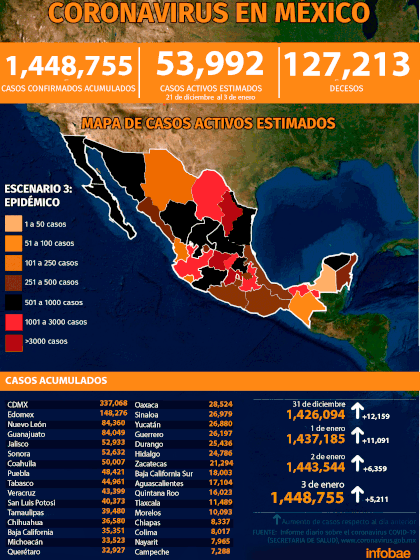 Similarly, 22 entities are in orange; Tamaulipas, Sinaloa and Veracruz in yellow; as well as Chiapas and Campeche with the lowest level of risk. On the other hand, the states of Sonora, Zacatecas, Querétaro, Aguascalientes and Hidalgo are under surveillance, as they are the states that remain at risk of turning red.

Regarding deaths, until yesterday, there were 1 7,789 suspected deaths of COVID-19 that include those pending by laboratory (n = 3,506) and those that are in the process of association-clinical-epidemiological judgment (n = 14,283) in SISVER.

In addition, Mexico City, the State of Mexico, Veracruz, Jalisco, Puebla, Baja California, Guanajuato, Nuevo León, Chihuahua and Coahuila are ranked as the 10 entities that have registered the highest number of deaths and that together represent more than half (62.5%) of all those in the country.

Under this panorama, it should be remembered that Mexico is the fourth country in the world with the most deaths from the pandemic, only below the United States, Brazil, and India, according to the Johns Hopkins University count. 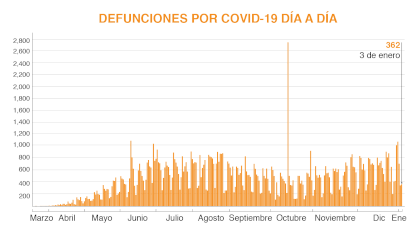 While according to the last press conference held on December 30, nationwide there was a total occupation of 49%: 50% general and 43% intensive therapy.

By federal entity, Mexico City kept 88% of beds occupied; followed by the State of Mexico with 82%; Hidalgo with 74%: and Nuevo León with 70%.

In beds with a ventilator for the most critical patients due to the disease, the capital of the country also led the highest occupation, with 83%; Edomex with 78%; Baja California with 63%; Nuevo León with 58%; and Hidalgo with 52%.

Mexico can raise over 18 billion pesos in cannabis taxes, but it will not be instantaneous: Canncura

Morelos and Baja California top the list with the greatest presence of organized crime, see ranking of other states