More than 118,000 deaths, six states are at risk of returning to red traffic lights

CDMX, Edomex, and Baja California are on red traffic lights; however, in the coming days, another six states could reach the maximum risk color

During the usual press conference to report on the progress of the pandemic in Mexico, the director of Epidemiological Operational Research, Ana Lucía de la Garza Barroso, pointed out that since the beginning of the epidemic, the Health authorities have analyzed 3,377,517 people, with a percentage of positivity of 39% registered in epidemiological week 50.

The specialist announced that for the week mentioned, the graph of estimated cases began with a decrease of 4%, however “it is important to see that although it seems that we started with an address, these data will change as the week passes. (…) this indicator will probably adjust ”.

Likewise, it estimated that at the moment there are 89,775 active cases, that is, 6% of the epidemic in Mexico is active and has presented symptoms of COVID-19 in the last 14 days, so if it is not confined and comply with all the measures health, could potentially contribute to the transmission of the virus.

In that sense, Mexico City and the State of Mexico are the entities that concentrate the highest number of active infections. According to the daily technical document, 31,611 and 6,875, respectively, an indicator that places them on a red traffic light of maximum risk, along with Baja California.

They are followed by Guanajuato, Nuevo León, Tabasco, Jalisco, Querétaro, Coahuila and Puebla; together they account for more than two thirds (81%) of the active cases in the country.

With the new epidemiological traffic light, 24 entities remain on an orange traffic light; However, the authorities have indicated to six of them that if they do not reduce infections and hospitalizations, they could reach the color of maximum risk in the coming days: Sonora, Aguascalientes, Hidalgo, Querétaro, Guanajuato and Zacatecas.

The only ones that managed to remain in yellow, of medium risk, were Veracruz, Tamaulipas and Sinaloa.

In contrast, Chiapas and Campeche are the states with the lowest viral load, since at the moment they have 104 and 69 active infections, respectively, one of the reasons why both are in green. 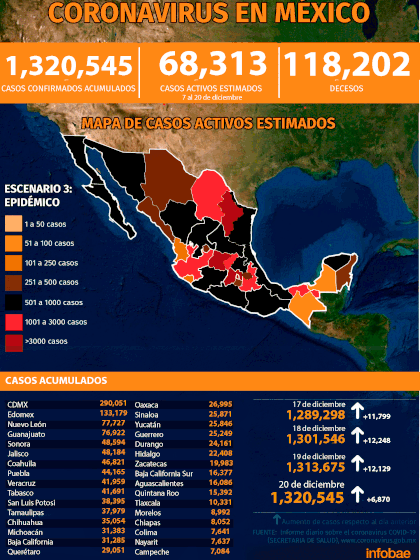 Regarding deaths, an increase of 2% was reported, however, from week 41 an increase in the registration of these began.

Until yesterday, there were 17,031 suspected deaths from COVID-19 that include those pending by laboratory (n = 3,394) and those that are in the process of association-clinical-epidemiological opinion (n = 13,637) in SISVER.

They continue to rank the City of Mexico, the State of Mexico, Veracruz, Jalisco, Puebla, Nuevo Leon, Baja California, Guanajuato, Chihuahua and Sinaloa the 10 entities that have registered the highest number of deaths, which together account for more than half (62.1%) of all those in the country.

On the other hand, Dr. de la Garza said that 978,002 people who contracted this disease have managed to recover . 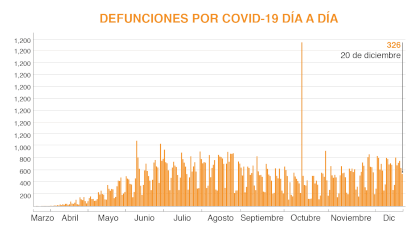 Regarding hospitalizations, the director of Epidemiological Operations Research reported that there is occupancy of general care beds of 46%, while beds with mechanical ventilators have an occupancy of 39%.

However, until December 19, seven entities exceeded 50% occupancy in their hospitals, including CDMX, which this morning, during the morning conference of President López Obrador, reported 85% in general beds. 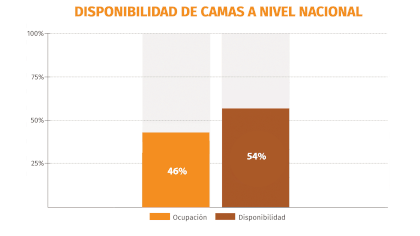