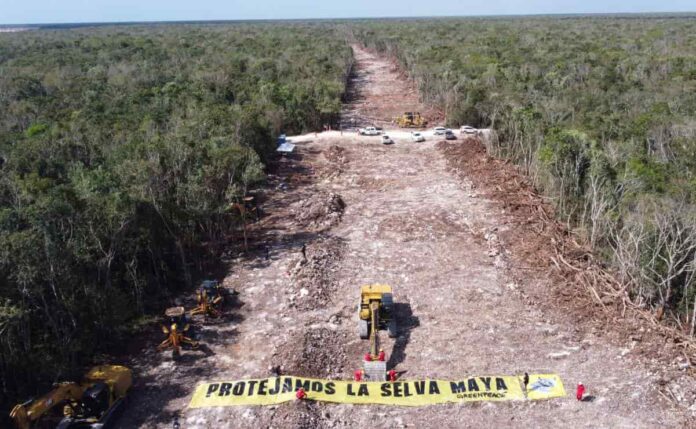 Senator Xóchitl Gálvez filed a criminal complaint against Javier May, general director of the National Fund for the Promotion of Tourism ( Fonatur ), and against those who are responsible for the illegal felling of trees that takes place in the southeast of the country during the construction works of the Mayan Train.

Gálvez, secretary of the Senate Anticorruption Commission, explained that until today the federal government has not presented the Environmental Impact Statement ( MIA ) in its regional modality, so the Ministry of Environment and Natural Resources ( Semarnat ) resolves on the origin or inappropriateness of the felling of the jungle, in the new line of Section 5.

The also president of the Commission on Indigenous Affairs of the upper house specified that the complaint filed with the Attorney General’s Office (FGR) establishes that having carried out the damages, without the necessary authorizations, not only implies the possible responsibility of administrative nature, but even criminal.

In response to a request made to the Transparency Unit, the Mexican Ministry of the Environment (Semarnat) acknowledged that there is no Environmental Impact Statement (MIA) for Section 5 of the Mayan Train, which will run from Cancun to Tulum.

In said request, a copy of the MIA in relation to section 5 was requested, as well as a copy of the resolutions, procedures and communications between Semarnat and the National Tourism Fund (Fonatur) for the construction of said section. In response, the General Directorate of Environmental Impact and Risk of Semarnat notified that the review “does not show that any Environmental Impact Manifestation has been entered.”

The only thing we have is a provisional authorization request submitted by Fonatur on December 7, 2021, that is before the Mayan train was changed since it would originally run along the federal highway and now it will be practically in the jungle. , over caverns and cenotes.

He recalled that these behaviors fall under the types contained in the Federal Penal Code, such as article 418, which establishes, a penalty of six months to nine years in prison and a fine for the equivalent of one hundred to three thousand days fine will be imposed, to which illegally cut, uproot, fell or cut down one or more trees.

He also cited Article 420 Quáter, which states that a sentence of one to four years in prison and a 300 to three thousand day fine will be imposed on anyone who does not carry out or comply with the necessary technical, corrective, or safety measures to avoid environmental damage or risk. that the administrative or judicial authority orders or imposes.

For its part, the Greenpeace organization opposes the construction of the Mayan Train, due to the environmental damage it is causing and has asked President Andrés Manuel López Obrador (AMLO) to cancel the section that goes from Cancún to Tulum since it considers that there is no environmental impact statement based on scientific studies and the jungle is being destroyed