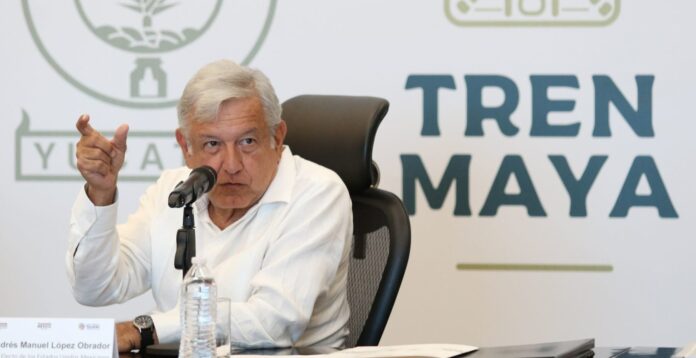 President López Obrador accused that there is a campaign of pseudo-environmentalists who serve private interests to oppose the Mayan Train.

President Andrés Manuel López Obrador accused this Monday of the existence of a campaign by “pseudo-environmentalists” who serve private interests to denounce the alleged improper felling of trees in various sections of the Mayan Train, one of the flagship works of the six-year term and which was It is scheduled to open at the end of next year.

At a press conference from the National Palace, the federal president said that in the 1,500 kilometers that the railway will travel between Tabasco, Campeche, Yucatan, Quintana Roo, and Chiapas, there will only be an impact on 100 hectares, which are already replaced with the reforestation of 200 thousand hectares.

The President of the Republic accused that created interests in the Mexican southeast seek to stop the progress of the work because they have land and seek to obtain some type of benefit contrary to the general priority.

“They began about two weeks ago to show images where breaches of the train from Cancún to Tulúm are being opened because they are not even working everywhere because the route was changed. We are taking care of the environment, they are using this because there is a company that has been authorized to extract material and we proposed that they change their line of business.

“That instead of having these banks of material, they use that entire area for tourism development and that we help them to have their permits in accordance with the law, even that they may have a very close port that they already have in concession. Delivering that port, a concession, these large ships, cruise ships, can be a very important project”, he explained.

This is the firm Vulcan Materials Company and its subsidiary in Mexico Sac-Tun whom on February 3, the head of the federal Executive accused of extracting stone materials from the Playa del Carmen jungle without permission and indicated that he would seek to change his line of business to develop a tourist complex.

Two weeks ago, the company reported that it is willing to find a solution in good faith with the administration regarding the concessions it has with its subsidiary Sac-Tun in Quintana Roo for the extraction of stone materials, in order to make available to the government the Punta Venado maritime terminal to speed up the construction of the Mayan Train.

“There are also many people who do not want the Mayan Train because they also have land, they want to get rid of it and that is over, they are no longer going to do juicy deals under the protection of power,” said López Obrador.

The President of the Republic asserted that three large natural parks with 18,000 hectares will be created around the Mayan Train and that rows of flowering trees will be planted on the banks of the tracks, such as guayacán, maculí and flamboyant.