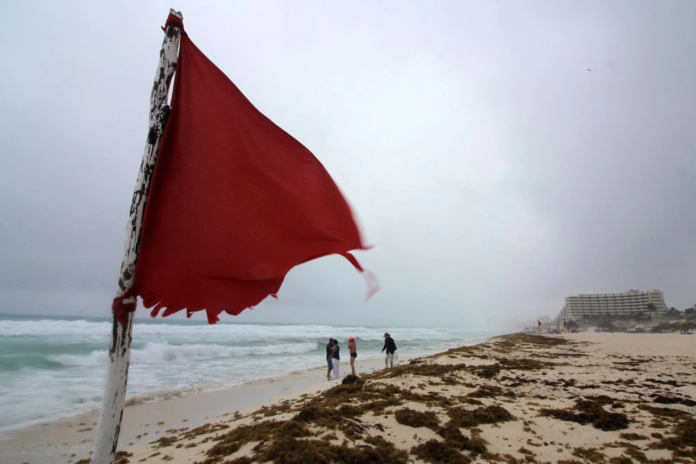 The system is located on the Campeche Sound, according to the National Meteorological Service (SMN)

The National Meteorological Service (SMN) reported that the storm with cyclonic potential that was moving over the Yucatan Peninsula has already left the country and entered the waters of the Gulf of Mexico. However, throughout this Monday, September 6, it will continue to hit the southeast of the country with its cloud bands.

Through a statement, the climate agency indicated that the system is located in the Campeche Sound, about 170 kilometers west of Celestún, Yucatán. In the next few hours, the low-pressure zone will leave very heavy rains in Campeche and Yucatán, with accumulations of 50.1 to 75 millimeters, and strong records in Quintana Roo, from 25.1 to 50 millimeters.

At the moment, it has a 30% chance of becoming a tropical cyclone within five days. It is moving slowly towards the north and the current forecast of the trajectory indicates that it will not advance towards Tamaulipas or Veracruz, but rather will move away from the national territory towards the US coast. According to forecasts, it could make landfall somewhere between Mississippi, Alabama and the Florida Peninsula.

This zone of instability comes in a period of apparent truce for part of the tropical cyclone season in the Atlantic, after weeks of intense activity that left devastating hurricanes such as Fred, Grace, and Ida at the end of August. The latter hit Louisiana, USA, on August 29 as a category four phenomenon on the Saffir-Simpson scale, causing great destruction in its wake and leaving millions of people without electricity.

Authorities confirmed on Sunday that in the northeast of the country alone, Ida left at least 50 fatalities, due to the floods it caused in New York and New Jersey. While in the first state 17 deaths were reported, in the second the death toll rose to 27. In addition, one person was killed in Connecticut, four in Pennsylvania, one in Maryland, and 12 in Louisiana.

From the SMN they recalled through a statement that September and October are the most dangerous months of the season, being the period in which a greater number of events are concentrated.

“In September and October there is the transition from summer to autumn, and there are cold fronts and cold air masses from the United States and Canada. When they collide with a tropical cyclone, they cause the trajectories of these to become erratic, and even park for several days, causing severe damage to the populations. Meanwhile, when they collide with the mountains of the Sierra Madre Oriental, cyclones cause strong runoff, increased flows in rivers and floods ”.

In the last 50 years, 270 tropical cyclones have hit Mexico. Of that total, 170 entered the national territory from the Pacific Ocean, while 100 arrived through the waters of the Atlantic.

The entity that has received the greatest number of impacts is Baja California Sur. In that state, 46 systems have touched down in the last five decades. They are followed by Veracruz, with 36; Sinaloa and Quintana Roo, both with 33; Tamaulipas, with 24; and Sonora, with 18.

“This high incidence of impacts from tropical cyclones is due to the fact that Mexico is located in the area of ​​influence of four important areas that generate these phenomena: the Gulf of Tehuantepec, the Sonda de Campeche, the eastern Caribbean Sea and the Atlantic.”

In addition, cyclones that originate in northwest Africa sometimes cross the Atlantic Ocean towards the Caribbean Sea and impact the eastern coasts of Mexico.

“Within these 50 years of intense cyclonic activity, adding the Northeast Pacific and Atlantic systems, 2020 is the year in which the most tropical cyclones have formed, with 52, followed by 2005, with 47 and 1978, with 42 systems. “Added the SMN.