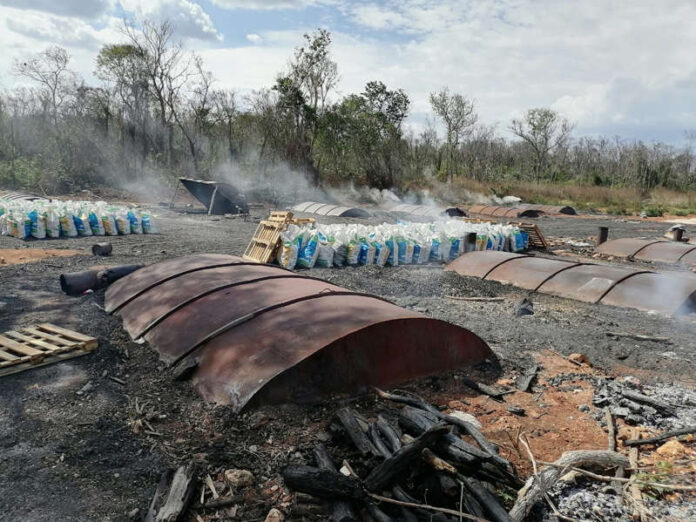 Campeche, Mexico (May 17, 2021).- Members of the National Guard and the Federal Attorney for Environmental Protection (Profepa) closed at least 15 clandestine charcoal kilns in fields of Mennonite producers located in the Municipality of Hopelchén, where hundreds of bags ready for transportation to the regional and national market were seized, however, there were no detainees.

The operation was carried out in a property located on the side of the Hopelchén-Iturbide state highway in the Dzibalchén-Iturbide section, where heavily armed agents of the National Guard and Profepa inspectors entered through a dirt road.

The alleged owner was denounced anonymously weeks ago on social networks by residents of the Iturbide community and environmental groups, for engaging in illegal charcoal production.

During the operation, at least 15 ovens were found, with smoking chimneys, as well as bags full of coal ready for shipment and transportation; a tractor, and a trailer, but there were no people on site.

Once the raid was completed, Profepa inspectors placed the closure seals on the site and the ovens, keeping the place under surveillance.

According to environmental organizations, Mennonite producers established in the municipalities of Hopelchén and Hecelchakán, in Campeche, are engaged in clandestine logging of large areas of forests and use the wood to market it in sawmills and to make charcoal, however, this is done without any permits for such activities.

The activists accuse that Hopelchén is the municipality with the highest degree of deforestation in the Yucatan Peninsula since every year more than 80 thousand hectares of forest are lost.

Baseball stadium in Campeche to be remodeled… by presidential order