In Jalisco, there is an escalation of violence that includes high-impact operations in closed places, in which it would normally be difficult for an armed group to enter and exit

GUADALAJARA, Jalisco.– Five people died and one more was seriously injured after being attacked with gunshots inside a house located on Morelos Street, between Salado Álvarez and Mariano Azuela, in the Hidalgo neighborhood, San Pedro Tlaquepaque municipality.

On Wednesday afternoon there was a shooting in the municipality of Tlaquepaque, in the Mexican state of Jalisco, which left 5 people killed and 1 injured.

The Attorney General of the State of Jalisco located 3 men and a woman without life, all with gunshot wounds to the body, in a property that housed a makeshift house.

Sometime later, at the same site, medical personnel treated another woman and another man, the latter later losing his life.

The events occurred on the afternoon of this Wednesday, at approximately 1:30 p.m.

Despite the fact that the Prosecutor’s Office collected evidence at the crash site, it was unable to provide more evidence.

It should be noted that Tlaquepaque, the municipality of the armed attack, is part of the Jalisco Metropolitan Area, as is Zapopan, where on Monday there was a shooting that left one dead, one person kidnapped and three wounded.

The entity is home to the Jalisco Nueva Generación Cartel (CJNG), born in 2011 under the leadership of Nemesio Oseguera Cervantes “el Mencho” (Photo: Cuartoscuro)

Restaurants and shopping malls in Jalisco: the new battlefields

The investigations indicate that an armed commando arrived at the restaurant Los Otates de Zapopan, in the metropolitan area of ​​Guadalajara, and committed, what the authorities associate, as a “levanton” (kidnapping).

The group arrived aboard several vehicles, two waiters and an agent who was at the site were injured, in addition, one of the gunmen who participated in the crime and was injured was found hours later dead.

According to reports, around 12:58 a.m., a commando arrived aboard four vehicles, dressed in tactical equipment, to the restaurant, the group was going for a diner whom they had planned to take by force and they succeeded. The victim was accompanied by between four and five gunmen, who unleashed the blasts.

Between 10 and 15 people participated in the crash, according to data from the State Attorney General’s Office, in addition, more than 100 9 mm and .223 caliber percussion caps were found.

Unofficial versions indicated that the person “raised” could be the businessman José Manuel Sánchez Cruz, “Manu” Vaquita, a partner in the District 5 bar where the former governor of Jalisco, Aristóteles Sandoval, was assassinated; however, the prosecutor pointed out that the victim has not yet been identified.

This Wednesday, during an operation in the Colonia Hacienda del Tepeyac, in Zapopan, a red Chevrolet Spark was secured, which presumably could be related to the shooting in Aqueduct. The car has JRH 86-66 license plates.

The unit was near the Colli Hospital, located in Volcán Tancítaro and Volcán Ajusco, where the body of one of the hitmen was abandoned after yesterday’s events. The distance between this site and the restaurant where the crash occurred is six blocks, that is, about 800 meters. 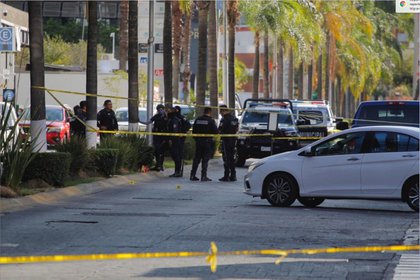 The country closed 2020 with 34,515 victims of intentional homicide, a figure slightly lower than the 34,648 cases in 2019 (PHOTO: FERNANDO CARRANZA / CUARTOSCURO.COM)

For decades, after the presidency of Felipe Calderón and his strategy of War against Drug Trafficking, the streets and cities of Mexico have become a field of war between criminals and authorities.

The entity is home to the Jalisco Nueva Generación Cartel (CJNG), born in 2011 under the leadership of Nemesio Oseguera Cervantes “El Mencho” and considered the criminal organization with the greatest expansion and violence in Mexico.

Without a doubt, is a resurgence of violence that in Jalisco has reached unseen levels. The execution in public view of relevant figures, including a former governor. The message that, even when you are protected by ten bodyguards and you are in a public place, in Jalisco no one is safe: no one can feel safe.